It says that in 2015 lack of access to sanitation cost the global economy around US $ 222.9 billion 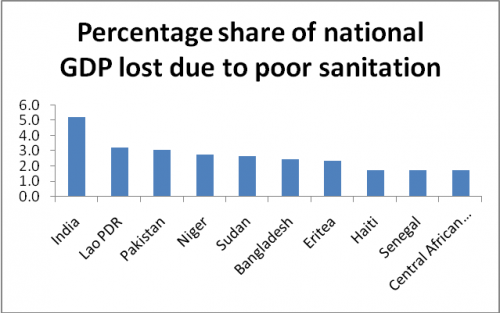 The economic burden of poor sanitation is the heaviest in Asia-Pacific, which is almost 77 per cent of the total amount. Latin America and the Caribbean and Africa each account for approximately 10 per cent of the global cost.

On a national level, in terms of total cost, India suffers the most, with US $ 106.7 billion wiped off the GDP in 2015. It is almost half of the total global losses and 5.2 per cent of the nation’s GDP.

According to the 2015 report of the Joint Monitoring Programme of the United Nations International Children’s Emergency Fund and the World Health Organization, around 44 per cent of Indians defecate in the open.

A 2011 report published by Water Aid says that sanitation access lowered the odds of children suffering from diarrhoea by 7-17 per cent and reduced the mortality rate of children under the age of five by 5-20 per cent. Water Aid is an international organisation dealing with water, health and sanitation.

The report talks about how to move towards sustainable solutions. Three solutions suggested are as follows:-