[Science] 5G-All that you need to know

Intuitively, one tends to think that a more powerful technology consumes proportionately more energy. However, it’s not so with 5G. Efficiency can be best described as a typically quantifiable amount of work that can be performed with a given set of resources.

At COP26, along with targets to achieve net zero carbon by 2070, and reduce emissions intensity by 45 per cent, India has set the ambitious target to reduce total projected carbon emissions by 1 billion tonnes (BT) by 2030. This would indicate a return to carbon emission levels last observed in 2007.

Fulfilling our ambitious commitments would require a whole-of-economy approach that strikes a balance between the integration of new energy technologies and the implementation of energy efficient systems throughout the nation. 5G and the technologies it enables will be critical tools in a wide arsenal that will help nations effectively address the climate challenges of our time.

When 2G networks were commercially launched back in 1992, they were groundbreaking. Whereas the first generation of wireless communication (1G) was completely analog technology, 2G introduced digital. It opened the doors for pictures, media messages, texts, and digitally encrypted phone conversations to be sent across varying networks.

New technologies phased out 2G over the years, but large parts of the planet still rely on 2G networks. Parts of Europe, South America, Central America, and Africa use 2G networks for communication, where most of the United States, Japan, and others have replaced these dated networks with newer generations. 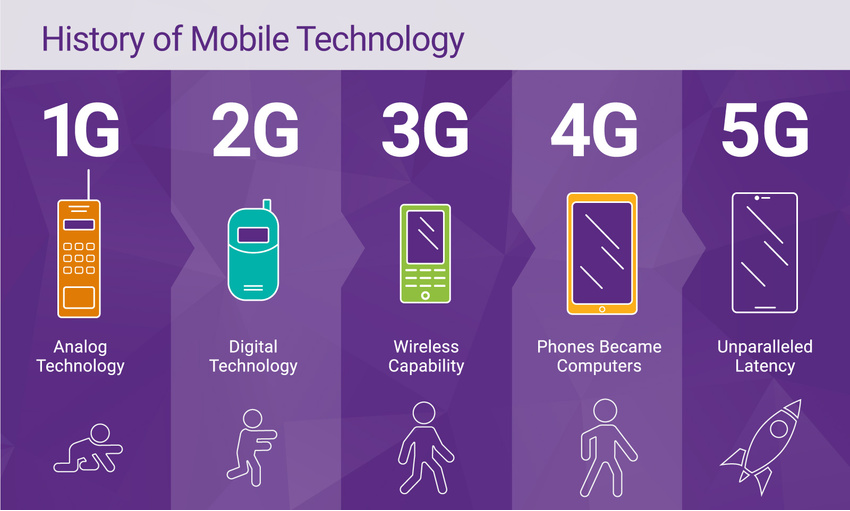 The third generation (3G) was introduced to the market in 2001 and ushered in wireless capabilities that we use to this day. 3G brought smartphone tech that allowed us to browse the web, share pictures, download videos, and perform other functions that had been impossible before.

The jump between the third and fourth generations of network connectivity was the largest the industry had ever seen. The transition from 3G to 4G likely could not have been accomplished without the technological breakthroughs in varying industries over the prior decade. These technologies have shaped various iterations of the 4G technology, the best known of which is 4G LTE (Long-Term Evolution). The flexibility and reliability offered by these technologies were previously unparalleled, and many industries immediately saw the benefits of being part of a much faster network.

The most significant takeaway from this fourth generation is that it turned our smartphones into powerful computers that could fit in our pockets. This monumental step forward was achieved by the introduction of HD streaming and accelerated web browsing, which we now take for granted.

Much of the work that we perform on desktop or laptop computers can be performed on a smartphone. Thanks to 4G technologies, we can maintain a stable connection from almost anywhere we’re working with minimal amounts of latency.

Now we arrive at 5G, which carriers have been gradually rolling out in select cities around the world. This technology has taken over a decade to develop, and with its faster upload speeds and drastically reduced latency, it’s on track to replace the previous 4G LTE technology. 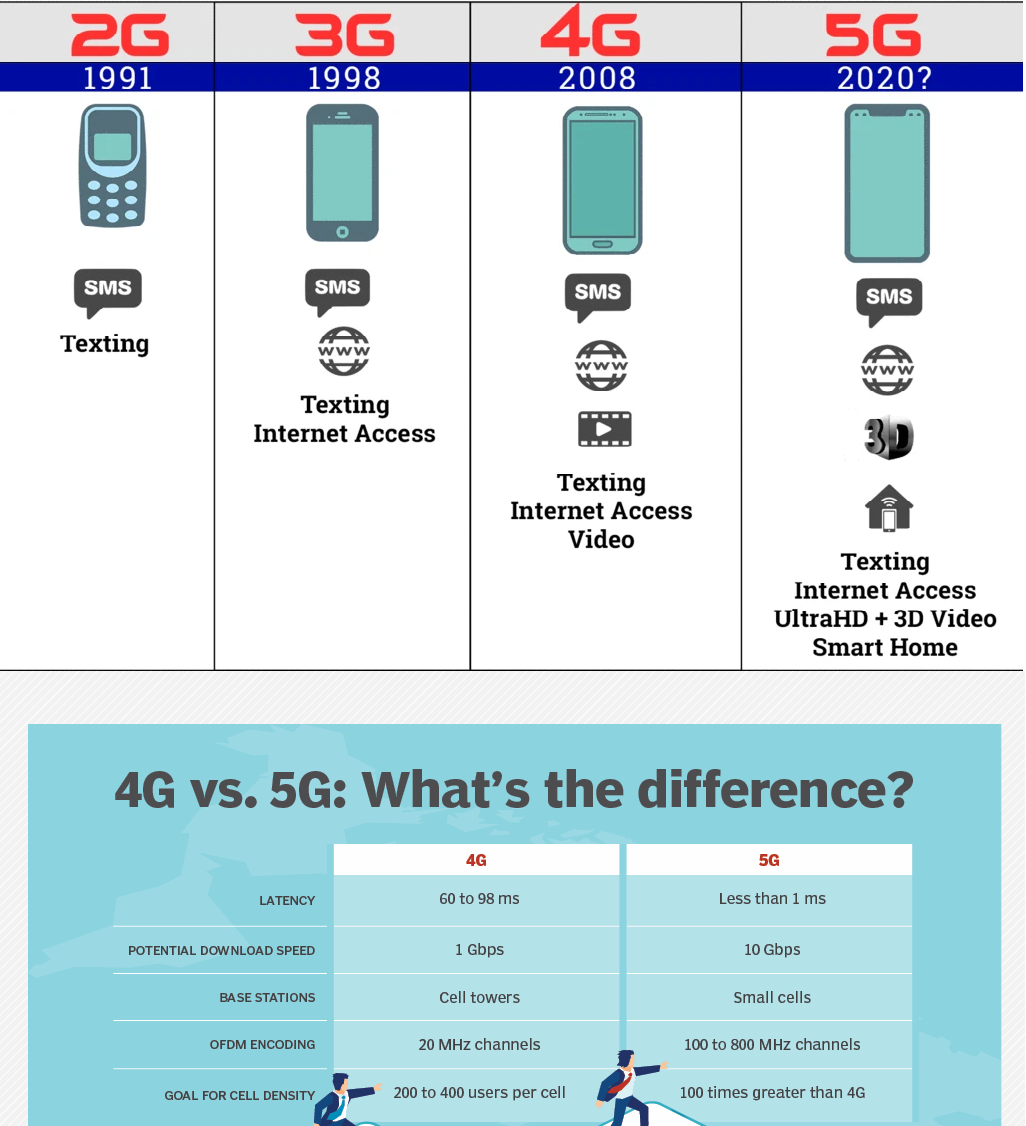 The accelerated rollout of 5G networks globally will provide numerous opportunities for nations to advance to newer and more powerful technologies but still protect the environment. By enabling the deployment of sophisticated AI and IoT networks at scale, 5G will make electrical grids more efficient, drive significant reductions in greenhouse emissions, as well as enable and optimise the integration of greater amounts of renewable energy.

A recent report from Ericsson highlights the immense benefits of quickly rolling out 5G networks. It reveals that 5G and IoT could yield carbon emissions savings of as much as 15 per cent.

At a micro or local level, one could expect even greater savings. As part of a technology upgrade, Ameresco, a Massachusetts-based company, discovered that replacing an old steam plant with a fully automated plant supported by 20,000 solar modules and its own microgrid reduced energy use by over 75 per cent.

An analysis of the macro-economic and environmental effects of 5G rollouts in France, Spain, Poland, Romania and Belgium reveals that economic output could increase by as much as €407 billion by 2030, over 1 million 5G jobs would be created, and as much as 33 million tonnes of CO2 equivalent could be prevented from being released into the atmosphere as direct result of the rollouts.

The environmental impact of 5G will stack up as the technology touches a greater number of sectors and aids the integration of new smarter technologies. Notable products and services that improve decision making across sectors already exist, and many firms are gearing up for enhanced offerings that would only be possible with 5G. In addition to enabling other industries to become more energy efficient, the 5G network will itself be more power efficient than its predecessors.

5G will, bit-for-bit, significantly reduce the amount of power currently required for transmission of information over 4G and legacy technologies. One analysis of The Columbia Climate School reveals that one kilowatt-hour (kWh) of electricity is consumed to download 300 high-definition movies on a typical 4G network. On 5G, that same one kWh would be enough to download over 5,000 ultra-high-definition movies.

Another study by the European Commission contends that power consumption per bit can be up to 90 per cent lower on 5G than on 4G.

Notable controlled experiments, deployments and proof of concepts also reveal how the way 5G is deployed has a significant effect on its emission profile.

In 2018, Nokia, Elisa and Efore commercially deployed a proof of concept (PoC) network with a liquid cooled base station system in an apartment building in Helsinki, Finland. Analysis from Finland’s VTT Technical Research Centre indicated that this tech stack directly reduced CO2 emissions by up to 80 per cent and operating energy expenditure by a significant 30 per cent.

Not only is 5G more energy efficient than its predecessors, but it is also best positioned to transform for the better interconnected supply chains and networks, improve data sharing, optimise systems, and increase operational efficiencies across the board.

It then ultimately boils down to this — as demand for connectivity increases, it is best for the environment if that demand is addressed by 5G rather than legacy technologies.

Failure to act quickly in rolling out 5G networks would mean that this increased demand would have to be served by 4G and older technologies, at a significant emission premium that we can ill-afford.