Recently, population control measures are being discussed by the states of Assam and Uttar Pradesh. Many other states like Rajasthan, Madhya Pradesh, Telangana and Andhra Pradesh, Gujarat, Maharashtra, Uttarakhand, Karnataka and Odisha have been following a two-child norm for local body elections for a while.

The bill proposed by the Uttar Pradesh law commission suggests that those with one or two children be made eligible for benefits in terms of increment in job promotions, monetary benefits, health coverage benefits and many more perks.

More than two children might involve penalties such as being debarred from government jobs and local body elections, and limiting ration cards to four people. The logic being offered is that a dip in population will allow UP to reach sustainable development goals and an equitable distribution of resources.

3) Table 1 below shows that UP has started showing a declining trend in the last decade, which is a positive sign towards population stabilization.

4) A Lancet study in 2020 has projected that India’s population will peak around 2048 to 160 crores and thereafter it will see a decline and reach around 109 crores around 2100. 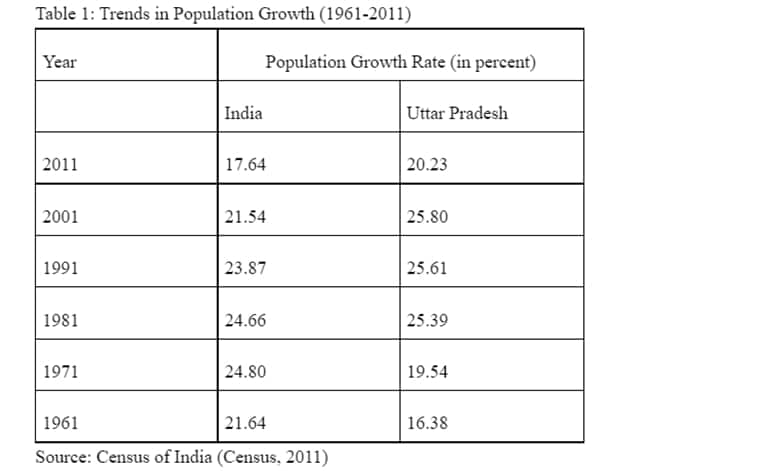 3) Several states already have a TFR lower than the national average. Trends in Contraceptive Use

1) The present contraceptive use of any method for India is 53.5 per cent.

2) Studies suggest that the sex composition of children is associated with contraceptive use in India.

4) For states like UP, the contraceptive uses of any method have been below the national average and unmet needs are quite high, around 18 per cent (Table 4). In such cases, the state should focus on providing a basket of choices to the family. 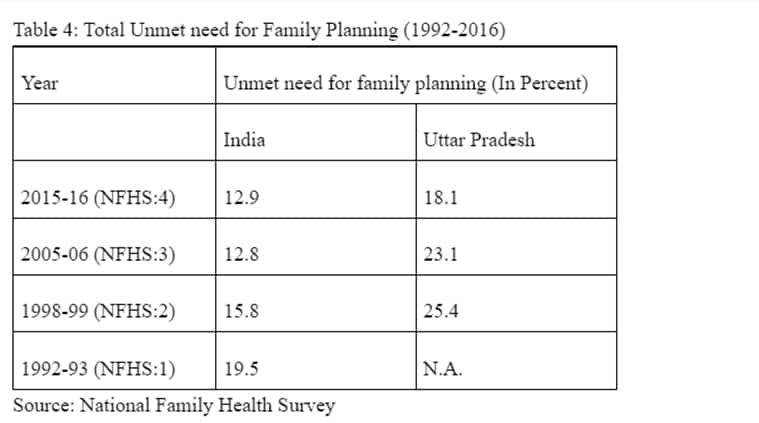 Education is the Contraceptive

1) There is a reduction in the TFR for both the national level and UP, with the years of schooling.

2) Also, states like Kerala and Punjab with a TFR of 1.6 indicate the same.

4) As education levels increase, the TFR decreases up to 1.71 for India and 1.9 for UP for more than 12 more years of schooling.

5) Studies have also indicated the same in the case of UP. Higher fertility was concentrated in districts with low levels of women’s education, predominantly in the north-central UP. 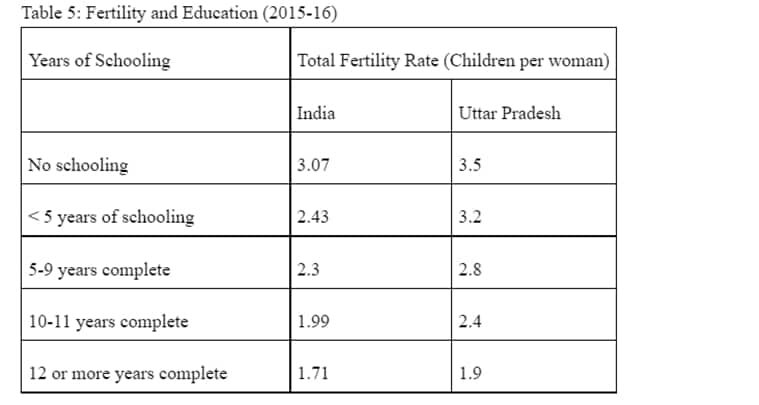 2) Bringing any such population control bill will worsen in states where sex-selective abortion is still practiced.

4) This should be a cause of concern as any coercive measure is likely to worsen this ratio against girls.

Given UP’s large population and geography, family planning and fertility should be targeted. Bringing educational reforms and giving choices for family planning would work more appropriately. This would lead to an overall improvement in the fertility outcome of the state as well as at the national level.