Afghanistan is a notoriously difficult country to govern. Empire after empire, nation after nation have failed to pacify what is today the modern territory of Afghanistan, giving the region the nickname “Graveyard of Empires, ” even if sometimes those empires won some initial battles and made inroads into the region. If the United States and its allies decide to leave Afghanistan, they would only the latest in a long series of nations to do so.

As the British learned in their 1839-1842 war in Afghanistan, it is often easier to do business with a local ruler with popular support than to support a leader backed by foreign powers; the costs of propping up such a leader eventually add up.

The closest most historical empires have come to controlling Afghanistan was by adopting a light-handed approach, as the Mughals did. They managed to loosely control the area by paying off various tribes, or granting them autonomy. Attempts at anything resembling centralized control, even by native Afghan governments, have largely failed. 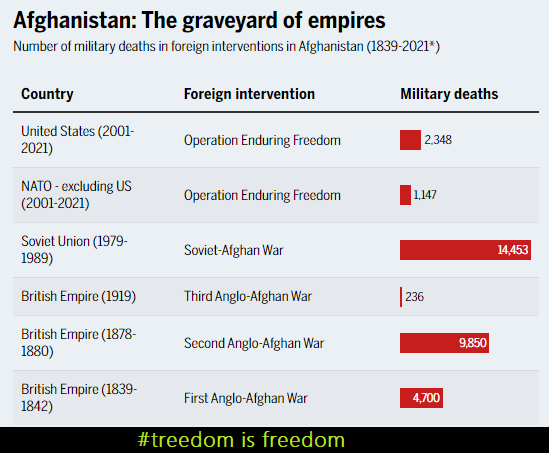 Afghanistan is particularly hard to conquer primarily due to the intersection of three factors.

Presumably, much of southern and eastern Afghanistan was already inhabited by the ancestors of today’s Pashtun (also known as Afghans historically); their Pashto language is an ancient eastern Iranian language closely related to the even more ancient Avestan, the original language of the Zoroastrian scriptures.

Afghanistan was relatively lightly populated at this time, as Alexander the Great is reported to have swept through the area with little resistance. Following this, the Maurya Empire from India controlled most of Afghanistan, although a Greek successor kingdom arose in Balkh (Bactria) in northern Afghanistan. Buddhism and Hinduism spread throughout the region during this period.

It was only after the collapse of the Maurya Empire and several invasions from Central Asia that the mountains of Afghanistan began to “fill up,” and acquire its reputation of being the home of many warlike peoples defending their individual turfs. Many of the invaders assimilated into the tribal structure of the Pashtuns, adapting their language.

Various tribes founded empires within the Afghanistan region before breaking up into mini-statelets. These included the Greco-Bactrians, the Indo-Parthians, the Saka (Scythians), the great Buddha-building Kushans, the Kidarites, and the Hephthalites (White Huns).

By this time, the region already acquired a difficult reputation. When the Arabs arrived in the region at the dawn of the 8th century, it was a patchwork of small but tough principalities. Attempts to conquer the Zunbils of Kandahar failed spectacularly, the first major setback faced by the Arabs after their great conquests began. An expedition of 20,000 men sent against the Zunbils returned with 5,000 people. It took almost 200 years for Afghanistan to be Islamicized from west to east, a process that only neared completion when Ya’qub ibn al-Layth al-Saffar, a Persian blacksmith born in Zaranj, in Afghanistan on the border with Iran conquered Kabul.

Even then, the Hindu Shahi dynasty held out for another hundred years in the easternmost parts of today’s Afghanistan until conquered by Mahmud of Ghazni (also in Afghanistan) around the turn of the millennium.

When the Mongols arrived in Afghanistan, they faced so much resistance in the Bamiyan valley, which they besieged in 1221, that the grandson of Genghis Khan was killed. In fury, the Mongols killed most of the valley’s original inhabitants: most of the modern Hazara who live there are descended from a Mongol garrison, some of whose men took Tajik wives. Fragmentation ensued again after the weakening of the Mongol Empire.

Ẓahīr-ud-Dīn Muḥammad Babur, the first Mughal emperor, managed to get himself a kingdom in Kabul for two decades before conquering India. Most of the Hindu Kush region would remain under loosely Mughal control until 1738 when it was conquered by Nader Shah and inherited a decade later by Ahmad Shah Durrani, who founded modern Afghanistan after Nader Shah’s death.

Mughal rule over Afghanistan was a combination of control over a few urban centers, and benign neglect coupled with paying off tribes in the region, a formula later replicated by the British. However, Mughal rule was always precarious, as they were faced with constant tribal revolts. An especially serious one from 1672-1677 led by the poet Khushal Khan Khattak was eventually defeated by the Mughal Emperor Aurangzeb, but Mughal authority never extended beyond main roads again.

The Mughal Empire extended as far west as Ghazni and Bamiyan in central Afghanistan; after fighting with the Persian Safavids for Kandahar for decades, they lost it permanently during the reign of Shah Jahan. The Safavids also had to deal with unruly Afghan tribes. Eventually a revolt against the Safavids broke out in Kandahar in 1709 due to Persian attempts to control Pashtun tribes and convert them to Shia Islam.

The Afghan revolt brought down the Safavid Empire; although partially checked by the rise of the warlord Nader Shah and his empire, eventually modern Afghanistan was founded in 1747 by Ahmad Shah Durrani, who picked off territory from Nader Shah’s descendants in Persia, the Mughals, and the Uzbeks to his north.

Since then, as both the British and Russians have learned, that while it is possible to conquer territory in Afghanistan temporarily, and defeat Afghans militarily in open battle, it is virtually impossible to hold the region down for long, when it is filled with guerrillas, tribes, and castles that can constantly weigh down a foreign power.

The people of Afghanistan have nowhere to go, and can fight their whole lives (foreigners, beware in particular of the Kandahar region), a luxury that outsiders do not have.

Minus a permanent occupation–which would be ineffective at best, and bloody and cost-prohibitive at worst–the only way to deal with Afghanistan is to deal with its plethora of local powers. And if this means accepting the Taliban, in exchange for a modicum of stability and a promise not to host global terrorist organizations, then so be it. The alternative is an unwinnable, never-ending war. USA too learned this fact of late.

You may win a battle but will loose the war in Afghanistan.