Ethics Series – WHAT IS GOOD AND WHAT IS EVIL?

Home/Editorials/Ethics/Ethics Series – WHAT IS GOOD AND WHAT IS EVIL?
By UPSCTREECategories: Editorials, Ethics

The topics of this article is exceptionally Simple, yet most of the time, the Simplest Questions are actually the most complex and elusive ones. For example, What is happiness ?,  is a simple question but it’s answer is as complex as it can ever get.

The following write up probes this dichotomy, and as it is understood by the greatest philosophers that we know of and what they thought as good/evil.

WHAT IS GOOD AND WHAT IS EVIL?

What is the measure of good and evil in the world? How can we know whether or not an act is good or bad? Is there in the very nature of the universe a code of laws which determines good and bad? Or, is goodness and badness a matter of the relation of an act to other acts?

Open the book of the story of mankind anywhere and you will find the question being asked over and over again: What is good and what is evil? This has been, without doubt, one of the most persistent problems of philosophers throughout the ages. Answers have been given in abundance, answers which appeared to the particular philosopher giving the particular answer to solve the problem for all times, but in a very few years the problem has arisen again in the thinking of others.

Is there an absolute, ultimate, and unquestioned measure of good and evil, one that was established at the beginning of time and that will stand until time is no more? A great number of people have believed in such a measure, and there have been thinkers who have attempted to state it in a code of commandments or basic principles of conduct for all times. The Ten Commandments of the ancient Hebrews is an example of this trend in human thinking. Here is a code of conduct which is believed by many to have been handed down from the seat of divine authority and which has authority at all times and in all places.

At the other extreme are thinkers who have believed that both good and evil are relative to the conditions of the time and place, and that an act which is good in one place and time will be evil in another. For example, a maniac is chasing a man with intent to kill him. The man passes me and turns to the right and disappears. Then the maniac comes up and asks which way his intended victim went I say that he turned left, and thereby save the life of an innocent man. This untruth is good, they argue in an attempt to prove that truth is not always good.

Between these two extremes are many theories of good and evil. Philosophers desiring to prove the absolute goodness of God have difficulty at times explaining the existence in the universe of death, suffering, and ill will. How can an all-good God create a world in which there are these apparent evils, they ask? And they have offered many ingenious arguments to reconcile a good God and an evil world.

And so, throughout the history of man’s thought we discover the problem of good and evil (which we speak of as “ethics” or “the ethical problem”) persistently challenging each philosopher.

Good and Evil According to the Early Greek Philosophers

We, he taught, see only the opposites, the good and the evil. But God sees the harmony, so that for him all things are fair and just in that they are parts of a great universal harmony. Thus, the good life for man is that life lived in harmony with the universal reason, the law which pervades all things. Man should seek to understand this harmony in the universe and to fit into it so that his actions are in accord with the principle governing the whole universe

Evil, for them, was but a phase, a note in the universal harmony and, thus, was not really evil but was another kind of good, a necessary part of the good whole.

DEMOCRTTUS, the leading figure of the Greek Atomists, taught that the goal of life is happiness. At all times man should seek happiness. For him, happiness was an inner condition or state of tranquillity which depended upon harmony of the soul. He taught that one should not depend for happiness upon things of the world since these come and go and a lack of them causes unhappiness. Rather, happiness should be a state of the inner man, a balance of life, an attitude which combines reflection and reason.

Goodness, for him, was not only a matter of action, but depended upon man’s inner desire. The good man is not one who does good, but one who wants to do good at all times. “You can tell the man who rings true from the man who rings false,” he said, “not by his deeds alone, but also by his desires.” Such goodness brings happiness, the goal of life.

With the coming of the Sophists thinking on this problem of good and evil entered a period of confusion. If, as Protagoras held, “Man is the measure of all things,” then man is the measure of good and evil. And, by man, the Sophists meant the individual man, you, me, your neighbor. Each one has the right to determine for himself what is good and what is evil. The end of this practice is, of course, chaos. What I consider evil, you may consider good. The Sophists let the matter rest here.

As a result, each man had his own code of good and bad. He defied others to prove him wrong or to justify their condemnation of him. Many representative Sophists, such as EUTHYDEMUS, THRASYMACHUS, and CALLICLES, taught that morality was mere convention, habit. That actually there are no moral laws, no all-inclusive principles of right and wrong. These men sought to justify the principle that each man should live as he desired, get what he wanted by any means possible, and frame his own code of good and evil.

The result of this position was moral anarchy, pure individualism, and the ultimate in selfishness. Nevertheless, a closer study of this position reveals a tendency which is rich in possibilities. The Sophists were making their appeal to the independent human mind. They were rebelling against arbitrary authority in matters of morals and were arguing that the human mind must think for itself and in thinking discover a code of right and wrong. The Sophists were champions of the individual and his independence.

True, they went to the extreme and lost the forest by concentrating attention upon the trees. Nevertheless, they had hold of a thing which is very precious to modern man, freedom to think and to arrive at conclusions about the good and the evil. The Sophists challenged moral theory to justify itself before the bar of human reason.

This is a new initiative by UPSCTREE, where in we will publish some of the great writings and content, that will not only help you in your ethics paper but also in your essay and optional papers as you deem fit. This is part of our Essay Test Series, where in we are not only giving topic-wise strategy but also two more aspects are added to it – Wisdom and Content Enrichment. Wisdom deals specially with philosophical aspects where as Content Enrichment deals with report, data and all things analytical.

P.S. – Few articles are open to all but most of them are exclusive for our Essay Students. As far as, this Ethics Series articles are concerned, only Part I is open to all. 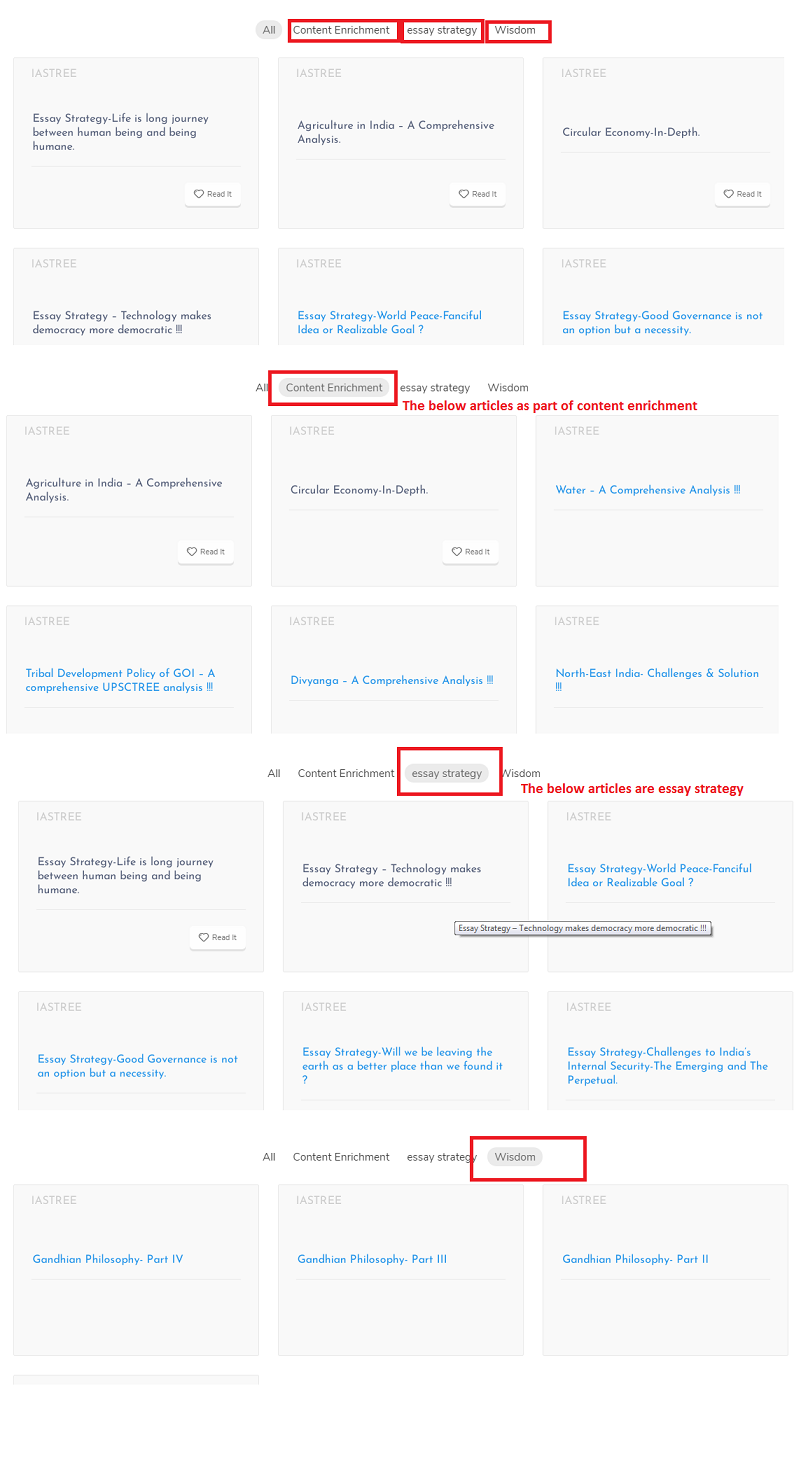