The Galathea National Park comprises the core area of the southern part of the Biosphere Reserve in Great Nicobar Island and consists of lowland forests which have the greatest abundance of endemic avifauna. It is the prime nesting habitat of the Nicobar Megapode and possibly the area of other endemic species too. 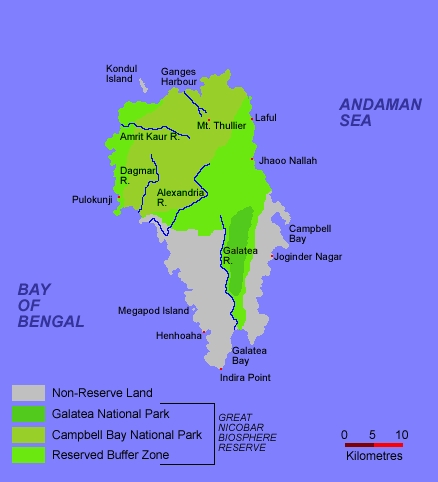 The park is endowed with large uninhabited low lying forests containing some rare and endangered plants with rich species content, and is also a rich resource of genetic germplasm.

The leather back turtle (Dermochelys coriacea) is the largest of all the living turtles in the world. It nests in large numbers during the months between December to February at South Bay.

This Macaque (Macaca fascicularis) has its habitat as tropical rain forests and is arboreal in habit. It is said to have crabs as food.

The Salt Water Crocodile (Crocodylus porosus) is the largest of all nesting crocodiles. It is well adapted to a semi-aquatic mode of life and is typically associated with brackish waters, coastal mangrove swamps etc. The mouth of the  River has an abundance of this sluggish and lethargic creature.