The Arctic could be free of sea ice by 2040, 30 years earlier than previously suggested 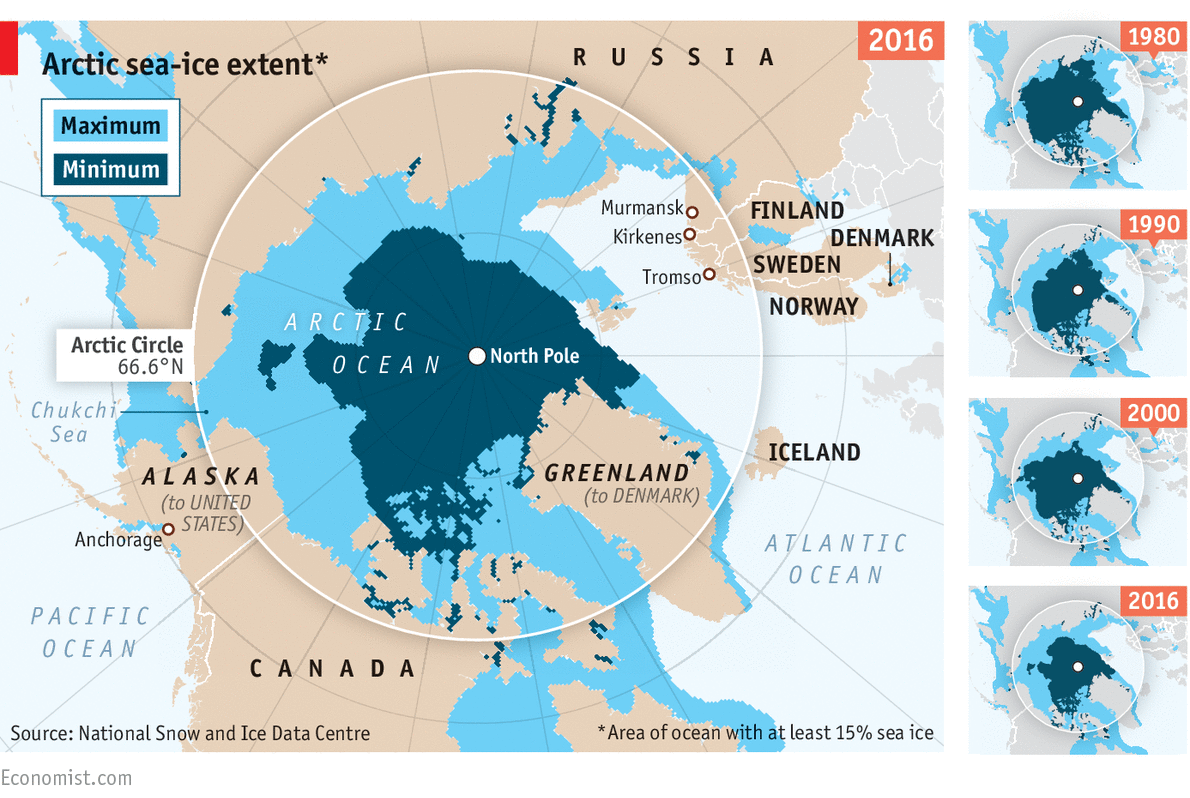 OVER the past three decades the area of sea ice in the Arctic has fallen by more than half and its volume has plummeted by three-quarters. So says a report “Snow, Water, Ice, Permafrost in the Arctic” (SWIPA), produced under the auspices of the Arctic Council (Prelims question in 2014), a scientific-policy club for the eight countries with territory in the Arctic Circle, as well as observers including China and India.

SWIPA estimates that the Arctic will be free of sea ice in the summer by 2040. Scientists previously suggested this would not occur until 2070. The thickness of ice in the central Arctic ocean declined by 65% between 1975 and 2012; record lows in the maximum extent of Arctic sea ice occurred in March. 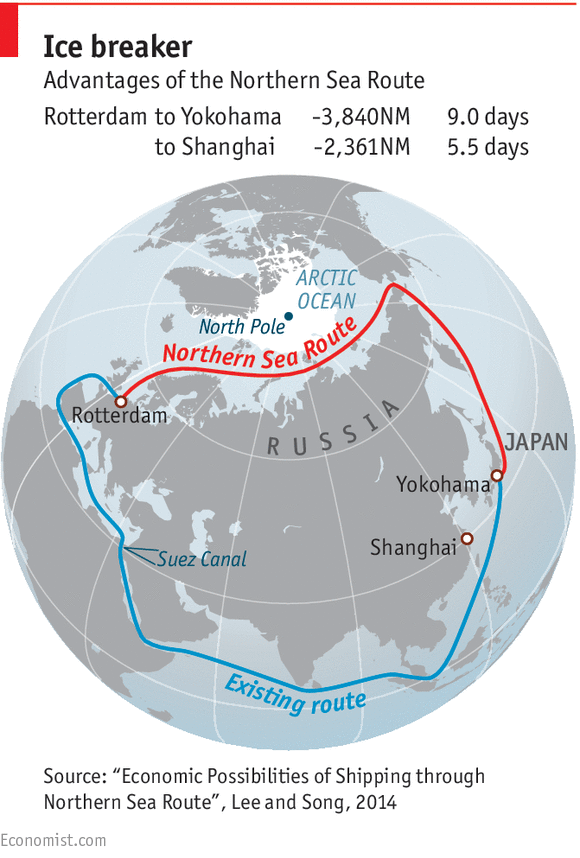 In theory shipping firms should benefit from access to a more open seaway. Using it to sail from northern Europe to north-east Asia can cut the length of voyages by two-fifths compared with travelling via the Suez Canal. But any Arctic promise has drifted away and the expected shipping boom has not materialised. In 2012 only 1m tonnes of goods were shipped through the northern passage, a paltry level of activity yet one not achieved since.

Even in the summer months the Arctic ocean is stormy, making timely delivery of goods impossible to guarantee. Drifting ice also poses a danger. Ships must be strengthened to withstand it, adding to construction costs. And a lack of coastal infrastructure, such as deepwater ports, means that spills of the heavy fuel oil that powers most vessels could wreak havoc on both ecosystems and reputations, because clean-up missions would have to set out from much farther away and would take much longer to be effective.

A new Polar Code from the International Maritime Organisation, which regulates shipping, came into force at the beginning of the year to try to address some of these concerns. It bans discharges of sewage and oily mixtures in polar waters. America and Canada, among others, want to go further. For one thing, they want a ban on heavy fuel-oil (as there is in the Antarctic, which has various special protections).

Nothing, however, looms larger than the potential for environmental calamity. The question of thawing is rising up the list of priorities both of countries with territory in the region and those farther afield. Sticking to the Paris agreement could, eventually, stabilise temperatures. But more radical measures may be needed given that countries are unlikely to keep within the limits set in Paris.

The Polar Code entered into force on 1 January 2017. This marks an historic milestone in the Organization’s work to protect ships and people aboard them, both seafarers and passengers, in the harsh environment of the waters surrounding the two poles.

Whilst Arctic and Antarctic waters have a number of similarities, there are also significant differences. The Arctic is an ocean surrounded by continents while the Antarctic is a continent surrounded by an ocean. The Antarctic sea ice retreats significantly during the summer season or is dispersed by permanent gyres in the two major seas of the Antarctic: the Weddell and the Ross. Thus there is relatively little multi-year ice in the Antarctic. Conversely, Arctic sea ice survives many summer seasons and there is a significant amount of multi-year ice. Whilst the marine environments of both Polar seas are similarly vulnerable, response to such challenge should duly take into account specific features of the legal and political regimes applicable to their respective marine spaces.