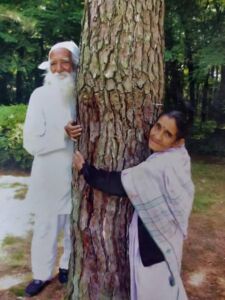 Sunderlal Bahuguna with his wife, Vimla

In 1978 and 1979, local people led by Sunderlal Bahuguna did not allow trees to be cut in Adwani (in picture), Badiyargarh, Kangad, Lasi and Khurat, part of the sustained agitation that led to the banning of commercial felling for 15 years in this part of the Himalaya. 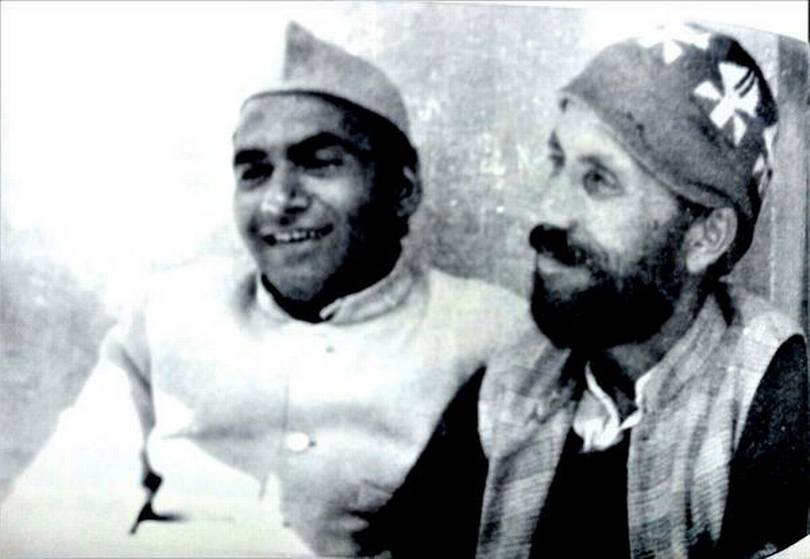 Chandi Prasad Bhatt (right) and the folk singer Ghanshyam Sailani, who came up with the name Chipko for the movement through a song he wrote. 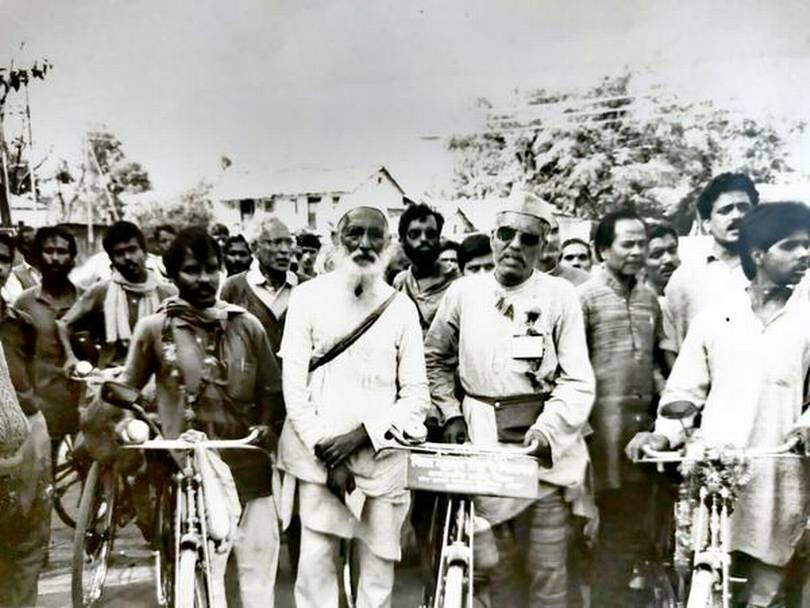 Tehri, September 1991: The Ganga Sagar to Gangotri cycle rally, which Sunderlal Bahuguna undertook to raise awareness about the protests against the construction of the Tehri dam on the Bhagirathi. 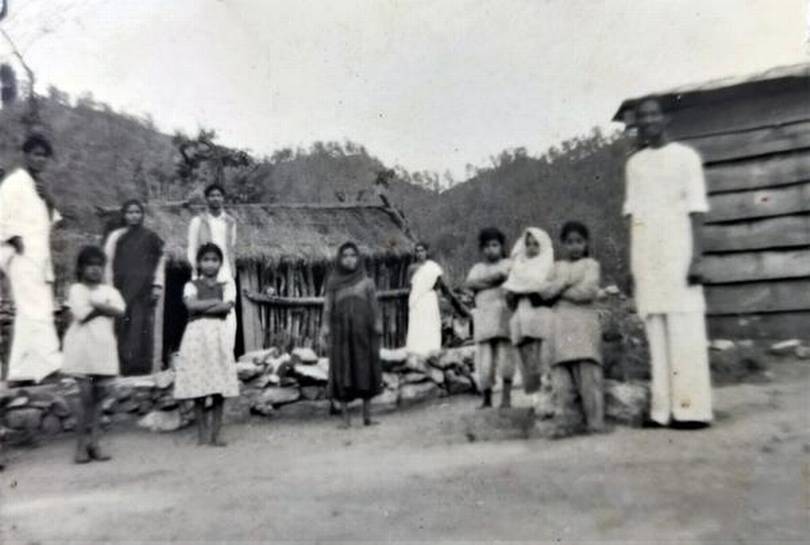 1957: Sunderlal Bahuguna and others outside the hut he built in Silyara village. The Parvatiya Navjeevan Mandal Ashram that started in the hut became the centre of Gandhiji’s principle of non-violence.

A look back at Sunderlal Bahuguna’s journey on the path of social activism and the beginnings of the Chipko movement:-

FROM 1973 to 1979, the mountain regions of what was then Uttar Pradesh (now Uttarakhand) witnessed several agitations to save forests from the axe.

The late Sunderlal Bahuguna, who left politics and dedicated his life to social service, came up with the idea of focussing on forest conservation while the folk singer Ghanshyam Sailani came up with the name Chipko for the movement through a song he wrote.

He also introduced the philosophy of “Ecology is the permanent economy”.

Let us look at some of the events that laid the basis for the movement in the 1970s. On May 30, 1930, residents of the area gathered at Tiladi, Barkot, on the banks of the Yamuna, demanding to be allowed to use wood and fodder from the forest free of cost.

The King of Tehri thought of the forest as his personal property and had his army open fire on the protesters, killing 17 people. Many people jumped into the Yamuna to save themselves and many were swept away; 80 people were put behind bars.

To pay his respects to the people who were martyred in Tiladi while fighting for their rights to the forest, on May 30, 1967, Sunderlal Bahuguna decided to declare May 30 as forest day.

He appealed to everyone besides his Sarvodayi (the title the Gandhian Vinoba Bhave coined for social workers who followed the Gandhian philosophy) colleagues to join him.

It said that forest, agriculture, animal husbandry and cottage industries should provide at least 300 days of employment throughout the year.

With the establishment of the Shaheed Smarak(martyr’s memorial) at Tiladi in 1969, Sunderlal Bahuguna along with his Sarvodayi colleagues took an oath to protect the forests. Meanwhile, he rushed from Garhwal to Kumaon to join a movement that from 1969 to 1971 campaigned for a liquor ban in the State. After the government imposed a liquor ban in the hills in 1971, Bahuguna returned to his quest to protect the forests.

On December 11, 1972, the first procession for a radical change in the forest system took place in the town of Purola near Barkot. A large number of villagers took part. The next day a huge procession was taken out in Uttarkashi in which Janakavi (folk singer) Ghanshyam Sailani, Chandi Prasad Bhatt and Sunderlal Bahuguna participated.

After that, Sunderlal Bahuguna walked to spread the message of the Chipko movement across Uttarakhand. He started his journey from Simlasu on the auspicious day of Deepavali, October 25, in 1973, with the blessings of Swami Chidananda, his spiritual guru and the head of the Divine Life Society.

Speaking on the occasion, Swami Chidananda, who had arrived from Munikireti, said: “I see the power to spread the great message of Indian culture in this 120-day journey.”

Sunderlal Bahuguna made his birthplace, Marora village, the first stop in his yatra. He had left the village at the age of 13 after differences with the royal family. The village was full of royal devotee diwans, but Sunderlal Bahuguna had become a disciple of Suman, who opposed the monarchy.

When he did not get support from his family, he left the village. Later, Sunderlal Bahuguna settled in Silyara village of Ghansali where he set up the Parvatiya Navjeevan Mandal Ashram. Later, he left the ashram to protest against the dam on the Bhagirathi in Tehri.

On the yatra, Sunderlal Bahuguna reached Kafkot via Ravaain, Jaunpur, Jaunsar Bawar, Rudraprayag, Sukhtal, Gwaldam and Tharali in Chamoli. Through Dharmaghar, Pithoragarh, Almora, Nainital, he measured the whole of Uttarakhand on foot. He completed his journey of 1,400 km on February 22, 1974, at Munikireti.

He was accompanied by his Sarvodayi colleagues such as Ghanshyam Sailani, Anand Singh Bisht and Surendra Dutt Bhatt. (Anand Singh Bisht was a forest ranger and the father of Uttar Pradesh Chief Minister Adityanath. He died on April 20, 2020, at the age of 89 in New Delhi.

During his travels, Sunderlal Bahuguna came to understand the consequences of forest destruction and the benefits of forest conservation. He saw that trees had the potential to keep the soil fixed and to help in water conservation. He noticed that there were disasters in the areas where deforestation had taken place.

For the British (who spread chir pine trees in the hills) and their Forest Department, the forests had been only a source of wood, lisa (pine resin) and other such products for trading. This approach continued even after Independence. But Sunderlal Bahuguna said that the real products of forests were soil, water and air (oxygen).

He argued that the first use of forests should be for the people living nearby so that they got the food, grass, wood and fodder they needed near them. This would increase the spirit of forest conservation among people. This thinking later led to the slogans of the Chipko movement, including the one mentioned earlier.

The Chipko movement began with the idea of the right of villagers over forests. Then the thinking arose that the forests were being destroyed for commercial exploitation. The contractor cuts many more trees than are allotted to him, for profit. The local people have to bear the loss.

In such a situation, the idea of forest-based employment for the local people was raised through the Forest Cooperative Society. The Uttarakhand Sarvodaya Mandal was established, and Anand Singh Bisht became its president. Sarvodaya sewaks started setting up forest-based industries in their institutions.

Chandi Prasad Bhatt established the Dasholi Gram Swaraj Mandal for the same purpose, but it could not even get five trees for its saw machine, while the Simon Company of Allahabad (now Prayagraj), which manufactures sports goods, was allotted thousands of ash trees in Chamoli district in March 1973.

From the ash tree, the villagers make a bull’s gamble to plough the fields. So when the Simon Company in collaboration with Dehradun’s State-run sports company planned to cut trees in Chamoli, it created a lot of discontent in the village.

Residents of Mandal and Fata villages protested and did not allow the company’s workers to cut trees in the forest. Despite several efforts between June and December, the company could not cut down trees because of the agitation of the residents.

Learning from this incident, the district administration cleverly summoned the men from the villages to the district headquarters in Gopeshwar on the pretext of compensation distribution for roads and gave the contractor a green signal to go ahead with his plan to cut the trees. As a result, the responsibility of saving the trees fell upon the women in the village.

Led by Gaura Devi, the women at Reni near Joshimath forced the labourers who had come to cut the trees to leave empty-handed. They chanted with zeal: “We will not allow our trees to be cut down.”

Seeing the widespread opposition to deforestation, the then Chief Minister of Uttar Pradesh, Hemavati Nandan Bahuguna, invited Sunderlal Bahuguna and Chandi Prasad Bhatt to Lucknow on April 24, 1974, for a discussion. Sunderlal Bahuguna highlighted his travel experiences and expressed the need for commercial felling of trees in the mountains to be stopped immediately. A committee was constituted under the chairmanship of Virendra Kumar, a professor of forest sciences at Zakir Husain Delhi College, to report on commercial tree felling. While the committee was still on the job, the auction process for cutting trees resumed. In October 1974, Sunderlal Bahuguna sat on a two-week fast to protest against this.

Later, in 1978 and 1979, local people led by Sunderlal Bahuguna did not allow trees to be cut in Adwani, Badiyargarh, Kangad, Lasi and Khurat. Sunderlal Bahuguna and Dhoom Singh Negi sat on fasts in Badiyargarh and Jajal respectively against the repression by the police, who were supporting the contractors. But in the end, the sustained agitation led to the banning of commercial felling for 15 years in this part of the Himalaya.

Activists from the ashram in Silyara

Sunderlal Bahuguna walked 22 miles from Tehri and built a hut in Silyara village, to fulfil a condition for marriage laid down by Vimla Nautiyal, who studied at the Kausani Ashram of Gandhiji’s English disciple Sarla Behn. She told Sunderlal Bahuguna that she would marry him if he “left politics and settled in a remote backward village”. On June 19, 1956, they were married.

They later launched several movements with Sunderlal Bahuguna and independently. The children of most of the workers had their primary education at the ashram in Silyara.