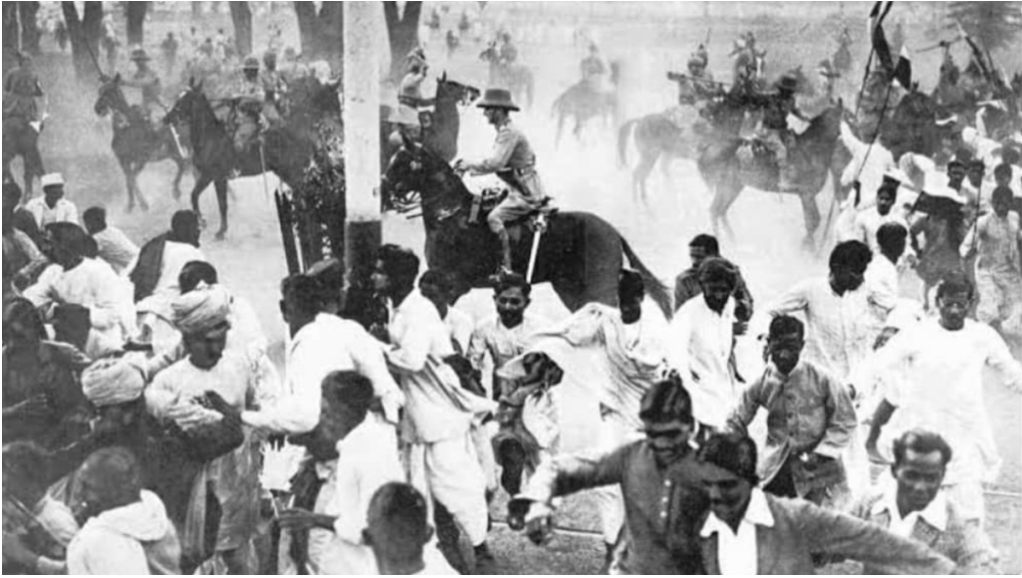 The Salt March to dandi, concluding with the making of illegal salt by Gandhi on April 6, 1930, launched a nationwide protest against the British salt tax. ⁣
⁣
At Dharasana, another town in Gujarat, salt production and storage was monopolized by the British.⁣ On May 4, 1930, Gandhi wrote to Lord Irwin, Viceroy of India, explaining his intention to raid the Dharasana Salt Works. He was immediately arrested. ⁣⁣

The Indian National Congress decided to continue with the proposed plan of action. Many of the Congress leaders were arrested before the planned day, including Nehru and Sardar Vallabhbhai Patel.⁣
⁣
The march went ahead as planned, with Abbas Tyabji, a 76 year old retired judge, leading the march with Gandhi’s wife Kasturbai at his side. Both were arrested before reaching Dharasana and sentenced to three months in prison.⁣
⁣
After their arrests, the peaceful agitation continued under the leadership of Sarojini Naidu and Maulana Abul Kalam Azad. Some Congress leaders disagreed with Gandhi’s promotion of a woman to lead the march.⁣
⁣
Several times, Naidu and the satyagrahis approached the salt works, before being turned back by police. At one point they sat down and waited for twenty-eight hours. Hundreds more were arrested.⁣
⁣
On May 21, the satyagrahis tried to pull away the barbed wire protecting the salt pans. The police charged and began clubbing them.⁣
⁣
American journalist Webb Miller was an eye-witness to the beating of satyagrahis with steel tipped lathis. His report attracted international attention. His first attempts at telegraphing the story to his publisher in England were censored by the British telegraph operators in India. Only after threatening to expose British censorship was his story allowed to pass. ⁣
⁣
The beating of the protesters disturbed people around the world and generated negative public opinion about Britain’s rule over India.⁣
⁣
The story appeared in 1,350 newspapers throughout the world and was read into the official record of the United States Senate by Senator John J. Blaine.⁣

This is what Webb Miller reported:⁣
⁣
Not one of the marchers even raised an arm to fend off the blows. They went down like ten-pins. From where I stood I heard the sickening whacks of the clubs on unprotected skulls. The waiting crowd of watchers groaned and sucked in their breaths in sympathetic pain at every blow.⁣
⁣
There were not enough stretcher-bearers to carry off the wounded; I saw eighteen injured being carried off simultaneously, while forty-two still lay bleeding on the ground awaiting stretcher-bearers. The blankets used as stretchers were sodden with blood.⁣
⁣
Miller later wrote that he went to the hospital where the wounded were being treated, and “counted 320 injured, many still insensible with fractured skulls, others writhing in agony from kicks in the testicles and stomach….Scores of the injured had received no treatment for hours and two had died.”⁣