News 2: Protests in Leh, Kargil for statehood as Ladakh completes 3 years as U.T.

News 5: Panamaram heronry in Kerala set to get a new lease of life

Considering the huge increase in the prices of fertilizers in global market, the Centre has “doubled” the fertilizer subsidy for this rabi season. From the budget estimate of ₹21,000 crore of nutrient-based subsidy, the amount has been more than doubled.

Ministry: Ministry of Chemicals and Fertilizers

The Nutrient Based Subsidy (NBS) Policy is being implemented w.e.f. 1.4.2010 by the Department of Fertilizers and under the said policy, a fixed amount of subsidy decided on annual basis, is provided on each grade of subsidized Phosphatic & Potassic (P&K) fertilizers depending on its Nutrient Content.

News 2: Protests in Leh, Kargil for statehood as Ladakh completes 3 years as U.T.

Ladakh’s twin districts of Kargil and Leh witnessed street protests to press for demands of statehood and special status under the Sixth Schedule of the Constitution, as the region completed three years of Union Territory (UT) status this month.

On January 6, 2021, the Union Home Minister constituted a committee under Minister of State for Home G. Kishan Reddy to have a dialogue with the representatives from Ladakh “to find an appropriate solution to the issues related to language, culture and conservation of land in Ladakh”.

Demand for restoration of statehood

The KDA and Apex Body-Leh (ABL) have been jointly fighting for the restoration of statehood and special status on the lines of the rights granted to the tribal areas of Assam, Meghalaya, Tripura and Mizoram to safeguard local culture, language and demography.

The government issued a notification empowering the Lieutenant Governor (L-G) of Ladakh to make rules for recruitment to the Public Services Group-A and Group-B Gazetted posts.

Recently, a senior U.S. defence official said while stating that America is the best partner when it comes to sharing high-end technology and next-generation equipment while India diversifies its military arsenal ending heavy dependence on Russia. They want to be partner of choice for India.

According to the Office of the Under Secretary of Defense for Acquisition and Sustainment, DTTI came about to expedite the scope of cooperation on defence technology that become narrow due to the presence of differing bureaucratic processes and legal requirements. Essentially, DTTI is an initiative to provide “increased US senior level oversight and engagement to get beyond these obstacles.”

What are its aims?

While DTTI is not a treaty or law, it is a flexible mechanism to make sure that senior leaders from both countries are engaged consistently to strengthen the opportunities in the field of defence. Its central aims include strengthening India’s defence industrial base, exploring new areas of technological development and expanding U.S.-India business ties.

Two Uttar Pradesh legislators were convicted on criminal charges in recent days, but only one of them has been disqualified and his seat declared vacant by the State’s Legislative Assembly secretariat. Azam Khan, the Samajwadi Party MLA for Rampur, was sentenced to a three-year jail term, for making an inflammatory speech in 2019.

As disqualification upon conviction on a criminal charge, accompanied by a prison sentence of two years and more is immediate, the Assembly secretariat declared his seat vacant.

However, there has been no such response in regard to Vikram Singh Saini, MLA from Khatauli, after he was sentenced to two years’ imprisonment in connection with the Muzaffarnagar riots of 2013.

When does conviction attract disqualification?

Section 8 of the Representation of the People Act (RPA), 1951, contains provisions aimed at decriminalising electoral politics. There are two categories of criminal cases that attract disqualification upon conviction.

Major IPC offences are included under this head:

Besides, serious provisions of special laws such as the Protection of Civil Rights Act, Customs Act, Unlawful Activities (Prevention) Act etc are among the category of offences that entail disqualification regardless of the quantum of punishment. Laws for prevention of Sati, corruption, terrorism and insult to national flag and national anthem etc are also part of this group.

All other criminal provisions form a separate category under which mere conviction will not entail disqualification. A sentence of at least two years in prison is needed to incur such disqualification.

Is there legal protection for legislators against disqualification?

If within that period, the convicted legislator files an appeal or revision application, it will not take effect until the disposal of the appeal or application. In other words, the mere filing of an appeal against conviction will operate as a stay against disqualification.

In Lily Thomas vs. Union of India, the Supreme Court struck down clause (4) as unconstitutional, thus removing the protection enjoyed by lawmakers.

Can the disqualification be removed?

The Supreme Court has the power to stay not only the sentence, but also the conviction of a person. In some rare cases, conviction has been stayed to enable the appellant to contest an election.

However, the SC has made it clear that such a stay should be very rare and for special reasons. The RPA itself provides a remedy through the Election Commission. Under Sec. 11 of the Act, the EC may record reasons and either remove, or reduce the period of, a person’s disqualification.

The EC exercised this power for Sikkim Chief Minister P.S. Tamang, who served a one-year sentence for corruption, and reduced his disqualification so as to contest a byelection and remain in office.

Which of the statements given above is/are correct?

News 5: Panamaram heronry in Kerala set to get a new lease of life

The Panamaram heronry, the largest breeding ground of herons in Kerala’s Malabar region, is set to get a fresh lease of life, thanks to the intervention of the Kerala State Biodiversity Board (KSBB) and the Panamaram grama panchayat.

The heronry, formed on a sandbank on the Panamaram river, is a breeding ground for nine species of waterbirds.

The site is also the only location in State where the cattle egret breeds. A few years ago birds like lesser whistling duck, jacanas, and moore bred on the wetlands near the site. However, human intervention has left a negative impact on the avian habitat.

The horns of rhinoceroses may have become smaller over time from the impact of hunting, according to a recent study which analysed artwork and photographs of the animal spanning more than five centuries.

We found evidence for declining horn length over time across species, perhaps related to selective pressure of hunting, and indicating a utility for image-based approaches in understanding societal perceptions of large vertebrates and trait evolution,” said the study, authored by scientists from the Universities of Helsinki and Cambridge, as well as the RRC.

Rhinos have long been hunted for their horns. The five surviving rhino species are threatened by habitat loss and hunting.

The study found that the rate of decline in horn length was highest in the critically endangered Sumatran rhino and lowest in the white rhino of Africa, the most commonly found species in the wild and in captivity.

This observation follows patterns seen in other animals, such as tusk size in elephants and horn length in wild sheep, which have been driven down by directional selection due to trophy hunting, the study said.

Rhinos once roamed many places throughout Europe, Asia, and Africa and were known to early Europeans who depicted them in cave paintings. At the beginning of the 20th century, 500,000 rhinos roamed Africa and Asia.

By 1970, rhino numbers dropped to 70,000, and today, around 27,000 rhinos remain in the wild. Very few rhinos survive outside national parks and reserves due to persistent poaching and habitat loss over many decades. Three species of rhino—black, Javan, and Sumatran—are critically endangered.

Rhinos share their habitat with a multitude of other plant and animal species. The protection of rhinos also helps protect the ecosystems on which they depend, as well as other species, including elephants, buffalo, large carnivores, and antelopes that share their habitat.

Although international trade in rhino horn has been banned under the Convention on International Trade in Endangered Species of Fauna and Flora (CITES)—a global agreement between governments to follow rules to monitor, regulate, or ban international trade in species under threat—since 1977, demand has remained high and continues to fuel rhino poaching in both Africa and Asia.

Ethiopia’s warring sides agreed to a permanent cessation of hostilities in a 2-year conflict, but enormous challenges lie ahead, including getting all parties to lay down arms or withdraw. The African Union envoy said that both parties have agreed on “orderly, smooth and coordinated disarmament.”

The parties in the conflict in Ethiopia’s northern region of Tigray have agreed to cease hostilities, a conflict which has displaced millions and left hundreds of thousands facing famine.

The war which broke out in 2020, pits regional forces from Tigray against Ethiopia’s army and its allies, who include forces from other regions and from neighbouring Eritrea. 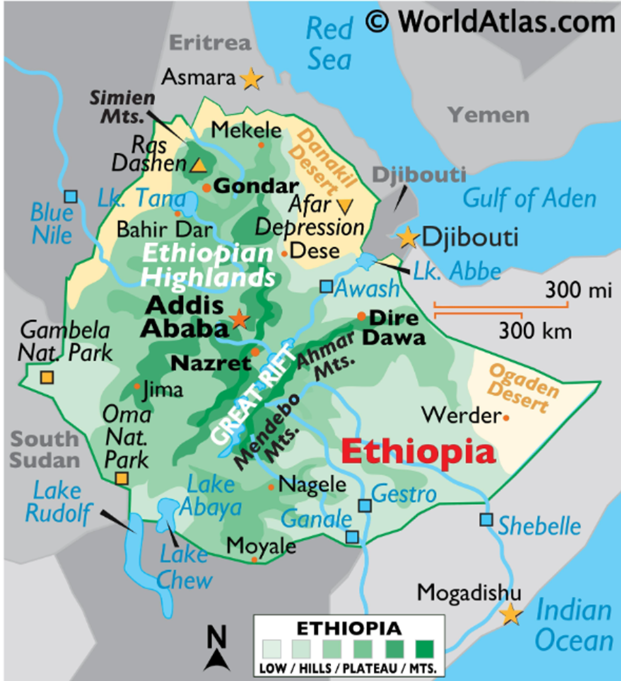 It is a landlocked country in Horn of Africa. It is the 2nd most populous country in African continent after Nigeria.

A Delhi court has said that an investigating officer in a CBI case has no right to be provided with the computer password of the accused without his consent since it may interfere with his right to privacy.

Special Judge Naresh Kumar Laka dismissed the CBI application seeking password and user ID of the computer of the accused, observing that he “cannot be compelled to give such information and in this regard he is protected by Article 20(3) of the Constitution of India as well as Section 161(2) of CrPC.”