Shri Bhim Sain Bassi takes over as Member of UPSC:-

Amidst global interest in the initiative of development of smart cities in India, a three day ‘100 Smart Cities India’ Conference got underway in Berlin, Germany today. It was inaugurated by the Minister of Urban Development Shri M.Venkaiah Naidu and Germany’s Minister of Nature Conservation, Forests, Building and Nuclear Safety Dr.Barbara Hendrics.

Leading global companies, policy makers and experts are attending the conference being organized to highlight investment opportunities in smart city development set in motion in India.

The finance ministry has notified that the equalisation levy (popularly known as Google tax) introduced in this budget, will come into force from June 1.

As of now, it will apply to payments for online advertisements made by Indian business entities to non-residents (such as Google, Yahoo, Twitter, Facebook) where the aggregate payment in a financial year to a non-resident exceeds Rs 1 lakh. Only B2B transactions attract this levy.

The equalisation levy of 6% will have to be deducted by a business entity in India which makes payments exceeding Rs 1 lakh in the aggregate in a financial year to a non-resident service provider for specified services.

Amid attempts of hacking and data theft by Pakistan and China, the government has come up with a smartphone policy for officials dealing with sensitive information.

To begin with, the government has put curbs on officials connecting their phones to office computers.They will not be allowed to even to charge the phone battery. Also, every such device will have to be approved by seniors.

The rules would apply to armed forces, intelligence officials and personnel of the Central Armed Police Forces (CAPF).

Water sensing from the skies in pipeline

According to the estimates from India’s groundwater authority, groundwater irrigation has been expanding at a very rapid pace since 1970s and now accounts for over 60% of the total area irrigated.

About 85% of the rural drinking water supply is also met from groundwater sources. The most significant change in the groundwater scenario is that the share of bore-well irrigation went up from one per cent during 1960-61 to 60% during 2006-07, according to 2008 statistics.

The CSIR-National Geophysical Research Institute (NGRI) is working on a plan to map India’s groundwater reserves by a helicopter-based electromagnetic survey.

The heliborne transient electromagnetic technique, as it is called, involves sending electromagnetic pulses to the ground — in timed bursts — and analysing the unique pattern that these waves make as they bounce off the freshwater or saline water reserves.

It would allow mapping potential water reserves nationwide and cost Rs.12,000 crore over 10 years. This approach would be less cumbersome than the manual methods now being used to map the groundwater.

India has moved up three spots from last year to 41 on the IMD World Competitiveness Scoreboard, 2016.

The country’s ranking had fallen to 44 in 2015, from 35 in 2012. Hong Kong replaced the US as the world’s most competitive economy. Switzerland, Singapore, Sweden, Denmark, Ireland, the Netherlands, Norway and Canada have got slots in the top 10.

India’s improvement is in sharp contrast to the sagging fortunes of other Asian countries. 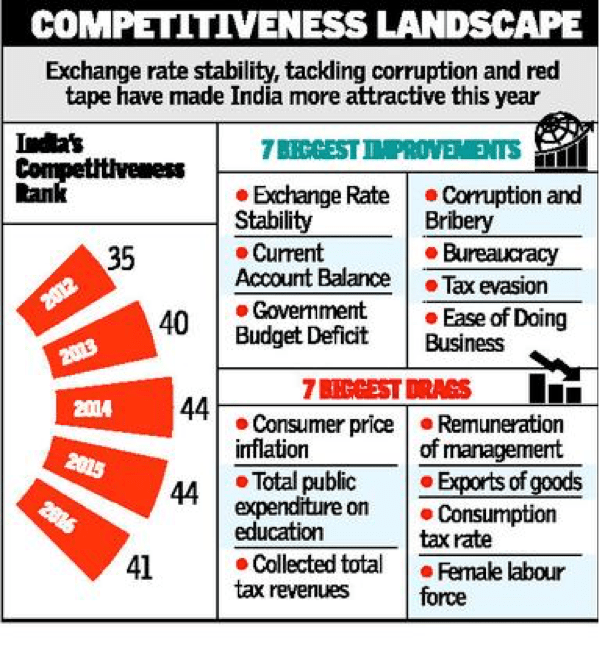