Project Limelight-Person-Homi Bhabha: The Scientist And The Statesman !!! 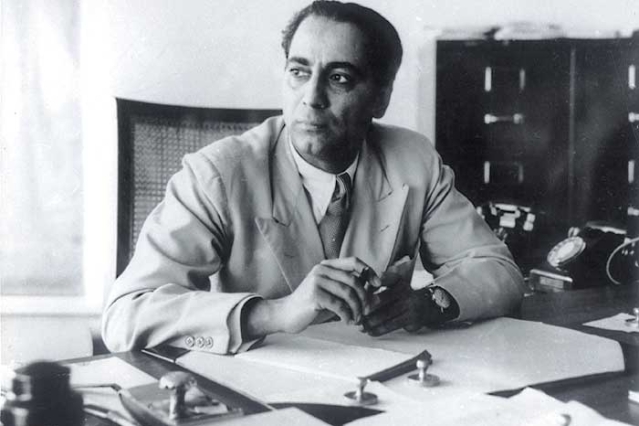 What Benjamin Franklin said long ago “If you would be famous after you are dead either write things worth reading or do things worth writing about” – is true both ways of one of India’s renowned scientists who happened to be a passenger on the ill-fated Air India plane which crashed on the icy Alps on January 24, 1966 – Dr. Homi Jehangir Bhabha. The simplest and perhaps the most appropriate homage that can be paid to him is to recollect his ideals and philosophy for the promotion of science and technology for the good of the common man.

After early education in India, Bhabha worked at Cambridge for some years. His original contribution on cosmic rays and related fundamental studies in physics won him wide recognition. He was made a Fellow of the Royal Society and doctoral degrees (honoris causa) were conferred on him by several universities of the West. By returning to his homeland he sacrificed a scientific career at Cambridge; as a true patriot, he worked with phenomenal patience and zeal under not too comfortable an environment but with a strong belief expressed in his own words: “that if proper appreciation and financial support are forthcoming it is the duty of people like us to study in our country and build on it outstanding schools of research such as some other countries are fortunate to possess.” To many of the younger generation, who are prone to criticise the Indian scene, his answer was: “For thousands of scientists who can do good work in a good environment there is perhaps only one who like Rutherford can create his own environment wherever he may be.”

A Queer Blend of Many virtues

Bhabha was a queer blend of many virtues difficult to enumerate. His love of Nature and his exquisite artistic tastes were imprinted on everyone of the institutions he founded. His character baffles analysis. Perhaps where analysis fails there genius begins, as Dr. John Holland Rose of Cambridge said of Napoleon.

The development of the atomic energy programme in India has all along been the exploitation of the atom for peaceful purposes only and in this he endeavoured with a strong faith that the essential difference between developed and underdeveloped countries is the lack of modern science and an economy based on modern technology without establishing science as a live force. A true symbol of this faith is the Tarapur nuclear energy station generating cheap electric power. Similar ones at Kalpakkam (Tamil Nadu) and Rana Pratapsagar (Raiasthan) will considerably add to our power resources.

Bhabha struck a new path in bringing up new institutions, though at the outset, it appeared unconventional and even hazardous. First, research scientists were found and the subjects were allowed to grow consistent with the expansion of the scientific base. He had always advocated and followed the policy of “building from within” and the emphasis had been on developing knowhow indigenously.

In a brilliant talk, hardly a few days before his death on “Science and Problems of Development” at the International Council of Scientific Unions attended by scientists from 35 countries, Bhabha said: “There are many factors which hamper progress in science but in general, the absence of the proper administrative set-up for science is greater than the paucity of scientists and technologists. A majority of scientists are made less effective through lack of the right type of administrative support.”

The administration of scientific research and development is an even more subtle matter than the administration of industrial enterprises and Bhabha was convinced that it could not be done on the basis of borrowed knowledge. It must necessarily be done as in the technologically advanced countries by scientists and technologists themselves.

Indeed, no one was more aware of the limitation of our fuel resources, fossil as well as nuclear, than Bhabha. As he said in his Presidential address to the Geneva Conference on “The Peaceful Uses of Atomic Energy” in 1965: “For the full industrialisation of the underdeveloped areas, for the continuation of civilisation and its further development, atomic energy is not merely an aid; it is an absolute necessity.”

His philosophy of life expressed in his words should be an example to all scientists of the day: “The scientist must be free to think and put forward whatever ideas he considers right. Ideas are some of the most important things in life and men are prepared to suffer and die for them. Good ideas cannot be suppressed even by violence. Nothing is irreversible except death,”

The formula for the success of a scientist is PAML (Patience, ability, money and luck) and Bhabha had all of them one by one in the course of his career, but alas, when he had all in plenty and interacting favourably the country was unlucky to lose him in tragic circumstances.