G5 – made up of 5 emerging economies of the 21st century: Brazil, China, India, Mexico, and South Africa.

G8 – Group of 7 biggest (at the time) advanced economies plus the EU: Canada, France, Germany, UK, USA, Japan, Italy, EU, and Russia (suspended most likely due to Ukraine crisis).

NGT’s notice on implementation of the Biological Diversity Act

India’s famed “green judge”, Justice Kuldip Singh, had observed in ICELA v. Union of India, 1996 that “enacting of a law but tolerating its infringement is worse than not enacting a law at all”.

The Manila-based award, named after a Filipino president killed in an aircraft crash, was set up in 1957 to honour people and groups tackling development problems. This award is considered as Asia’s Nobel Prize.

As per the Act, their centres may be sealed for minor lapses while doctors can be booked, or their licences be suspended.

National Board for Wildlife (NBWL)

Hampi (Hampe) is a village and temple town recognised as a UNESCO World Heritage Site, listed as the Group of Monuments at Hampi in northern Karnataka, India. It is located within the ruins of the city of Vijayanagara, the former capital of the Vijayanagara Empire. 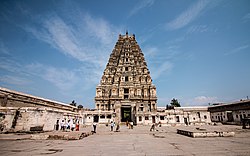 Hampi — traditionally known as Pampa-kshetra, Kishkindha-kshetra or Bhaskara-kshetra — is derived from Pampa, the old name of the Tungabhadra River.

Emperor Ashoka’s Rock Edicts in Nittur & Udegolan (both in Bellary district) suggest that this region was part of the Maurya Empire during the 3rd century BC.

The ruins of Hampi were surveyed in 1800 by Scottish Colonel Colin Mackenzie, first Surveyor General of India.The Islamic Quarter, sometimes called the Moorish Quarter, is located between the northern slope of the Malyavanta hill and the Talarigatta Gate. According to archaeologists, high-ranking Muslim officers of the king’s court and military officers lived in this area Unique Identification Authority of India (UIDAI), a statutory authority established on 12 July 2016 by the Government of India, under the Ministry of Electronics and Information Technology, under the provisions of the Aadhaar Act 2016. TheHindu in its September edition ran a story on these-Nautanki,Tamasha,lavani,swang,rasleela,Bhagat
*rasleela, bhagat and swang, the older form of nautanki practiced in UP

Hague Convention on the Civil Aspects of International Child Abduction

Rann of Kuchh: Flora and Fauna

Prosopis juliflora, is an invasive plant