Society-Meet India’s ‘water doctor’, who has turned 84 acres of barren land into a water bowl !!!

Home/Editorials/Society/Society-Meet India’s ‘water doctor’, who has turned 84 acres of barren land into a water bowl !!!
By UPSCTREECategories: Editorials, Society

Ayyappa Masagi has a simple message: “You want water? Call me!” Thousands have. And his phone rings dozens of times a day. There appears to be an endless supply of patients for the man nicknamed India’s “Water Doctor”. “I faced a lot of water problems in my childhood,” he said. “I used to go at 3am to fetch water from the stream. So I made an oath that when I grew up I would find a solution. So I quit my job as a mechanical engineer in 2002 to solve India’s water problem, 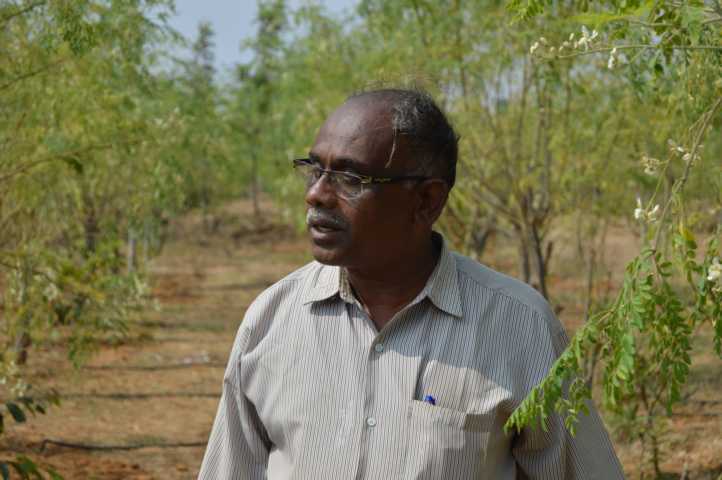 India is enduring a catastrophic water crisis. About 330 million people are suffering water shortages after the failure of the last two monsoons. Reservoirs are dry. Farmers have committed suicide. Thousands of drought-stricken villagers have flocked to cities, desperate for water, praying for rain. According to Ayyappa’s calculations, if just 30 per cent of India’s rainwater were captured and stored, “one year’s rain would sustain the nation for three years.”

To prove it, in 2014 Ayyappa bought 84 acres of barren land near Chilamathur, a famously drought-prone region of Andhra Pradesh, 110km northeast of Bangalore. “The wind here was like a firewind. I told my partners, ‘Within one year I will make this land a water bowl.’” Today, a network of 25,000 sand-filled pits and four new lakes capture and store any rainwater that falls here. No drop is allowed to escape into rivers and run off to the sea. It stays on and in the land, keeping the subsoil charged with water which, when needed, is drawn from five shallow bore-wells.

The topsoil from digging out the lakes has helped level the land, which has been planted with trees and crops. Roughly 60 per cent of the trees will form dense forest, while 40 per cent will be fruit trees to generate income. Grains and vegetables have also been planted, and next year there will be a dairy here too. The plan is to make this a sustainable organic farm, totally self-sufficient for all its water needs.

Through his Water Literacy Foundation, Ayyappa is training “water warriors” to spread his message. He’s already written seven books and trained more than 100 interns from India and abroad, including Germany, Japan and the US. “If you only talk, nothing will happen. You have to do something and prove it. Governments are coming forward to take up my service, replicating my model. Once the community attitude changes, our political attitudes change, we can replicate this concept throughout the world.”