A disaster is a result of natural or man-made causes that leads to sudden disruption of normal life, causing severe damage to life and property to an extent that available social and economic protection mechanisms are inadequate to cope.

The International Strategy for Disaster Reduction (ISDR) of the United Nations (U.N.) defines a hazard as “a potentially damaging physical event, phenomenon or human activity that may cause the loss of life or injury, property damage, social and economic disruption or environmental degradation.”

High Powered Committee (HPC) was constituted in August 1999 under the chairmanship of J.C.Pant. The mandate of the HPC was to prepare comprehensive model plans for disaster management at the national, state and district levels.

This was the first attempt in India towards a systematic comprehensive and holistic look at all disasters.

Thirty odd disasters have been identified by the HPC, which were grouped into the following five categories, based on generic considerations:-

India’s Key Vulnerabilities as articulated in the Tenth Plan, (2002-07) are as follows: 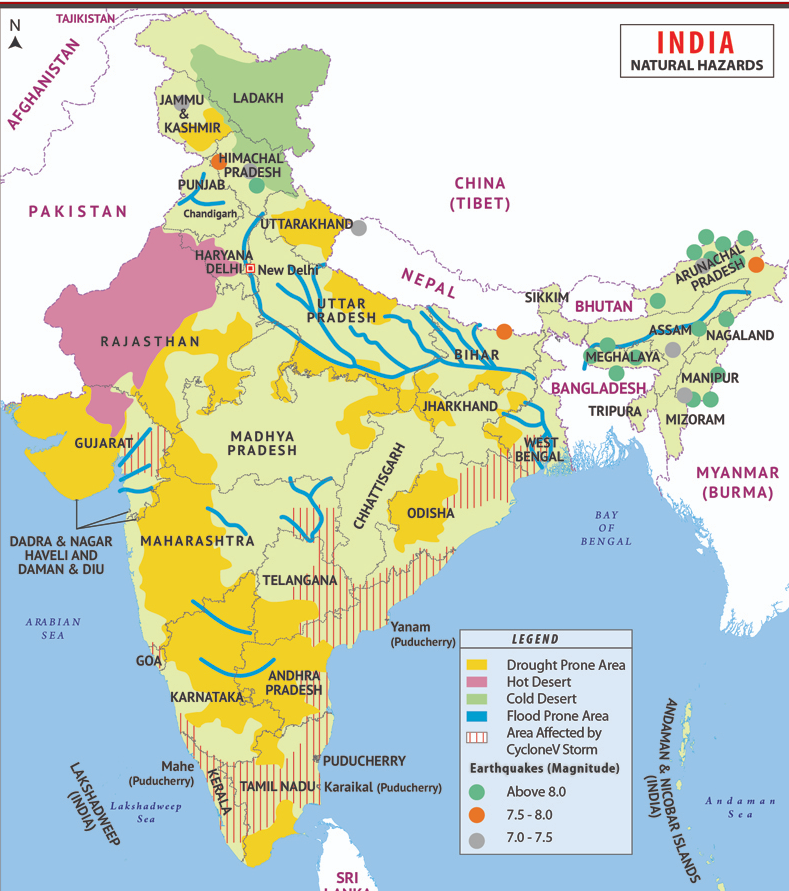 Vulnerability is defined as:-

“the extent to which a community, structure, service, or geographic area is likely to be damaged or disrupted by the impact of particular hazard, on account of their nature, construction and proximity to hazardous terrain or a disaster prone area”.

The concept of vulnerability therefore implies a measure of risk combined with the level of social and economic ability to cope with the resulting event in order to resist major disruption or loss.

Example:- The 1993 Marathwada earthquake in India left over 10,000 dead and destroyed houses and other properties of 200,000 households. However, the technically much more powerful Los Angeles earthquake of 1971 (taken as a benchmark in America in any debate on the much-apprehended seismic vulnerability of California) left over 55 dead.

Physical vulnerability relates to the physical location of people, their proximity to the hazard zone and standards of safety maintained to counter the effects.

The Indian subcontinent can be primarily divided into three geophysical regions with regard to vulnerability, broadly, as, the Himalayas, the Plains and the Coastal areas.

The degree to which a population is affected by a calamity will not purely lie in the physical components of vulnerability but in contextual, relating to the prevailing social and economic conditions and its consequential effects on human activities within a given society.

Global warming is going to make other small local environmental issues seemingly insignificant, because it has the capacity to completely change the face of the Earth. Global warming is leading to shrinking glaciers and rising sea levels. Along with floods, India also suffers acute water shortages.

The steady shrinking of the Himalayan glaciers means the entire water system is being disrupted; global warming will cause even greater extremes. Impacts of El Nino and La Nina have increasingly led to disastrous impacts across the globe.

Scientifically, it is proven that the Himalayan glaciers are shrinking, and in the next fifty to sixty years they would virtually run out of producing the water levels that we are seeing now.

This will cut down drastically the water available downstream, and in agricultural economies like the plains of Uttar Pradesh (UP) and Bihar, which are poor places to begin with. That, as one may realise, would cause tremendous social upheaval.

India is experiencing massive and rapid urbanisation. The population of cities in India is doubling in a period ranging just two decades according to the trends in the recent past.

Urbanisation is increasing the risks at unprecedented levels; communities are becoming increasingly vulnerable, since high-density areas with poorly built and maintained infrastructure are subjected to natural hazards, environmental degradation, fires, flooding and earthquake.

Urbanisation dramatically increases vulnerability, whereby communities are forced to squat on environmentally unstable areas such as steep hillsides prone to landslide, by the side of rivers that regularly flood, or on poor quality ground, causing building collapse.

Most prominent amongst the disasters striking urban settlements frequently are, floods and fire, with incidences of earthquakes, landslides, droughts and cyclones. Of these, floods are more devastating due to their widespread and periodic impact.

Example: The 2005 floods of Maharashtra bear testimony to this. Heavy flooding caused the sewage system to overflow, which contaminated water lines. On August 11, the state government declared an epidemic of leptospirosis in Mumbai and its outskirts.

Developmental activities compound the damaging effects of natural calamities. The floods in Rohtak (Haryana) in 1995 are an appropriate example of this. Even months after the floodwaters had receded; large parts of the town were still submerged.

Damage had not accrued due to floods, but due to water-logging which had resulted due to peculiar topography and poor land use planning.

Disasters have come to stay in the forms of recurring droughts in Orissa, the desertification of swaths of Gujarat and Rajasthan, where economic depredations continuously impact on already fragile ecologies and environmental degradation in the upstream areas of Uttar Pradesh and Bihar.

Floods in the plains are taking an increasing toll of life, environment, and property, amplified by a huge population pressure.

The unrestricted felling of forests, serious damage to mountain ecology, overuse of groundwater and changing patterns of cultivation precipitate recurring floods and droughts.

When forests are destroyed, rainwater runs off causing floods and diminishing the recharging of groundwater.

The spate of landslides in the Himalayas in recent years can be directly traced to the rampant deforestation and network of roads that have been indiscriminately laid in the name of development.

Destruction of mangroves and coral reefs has increased the vulnerability of coastal areas to hazards, such as storm surges and cyclones.

Commercialisation of coastal areas, particularly for tourism has increased unplanned development in these areas, which has increased disaster potential, as was demonstrated during the Tsunami in December 2004.

Every ninth student in Delhi’s schools suffers from Asthma. Delhi is the world’s fourth most polluted city.

Each year, poor environmental conditions in the city’s informal areas lead to epidemics.

Delhi has one of the highest road accident fatality ratios in the world. In many ways, Delhi reflects the sad state of urban centers within India that are exposed to risks, which are misconstrued and almost never taken into consideration for urban governance. 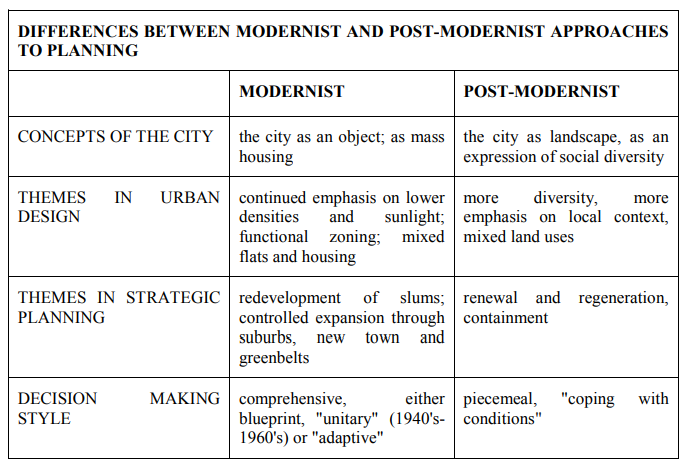 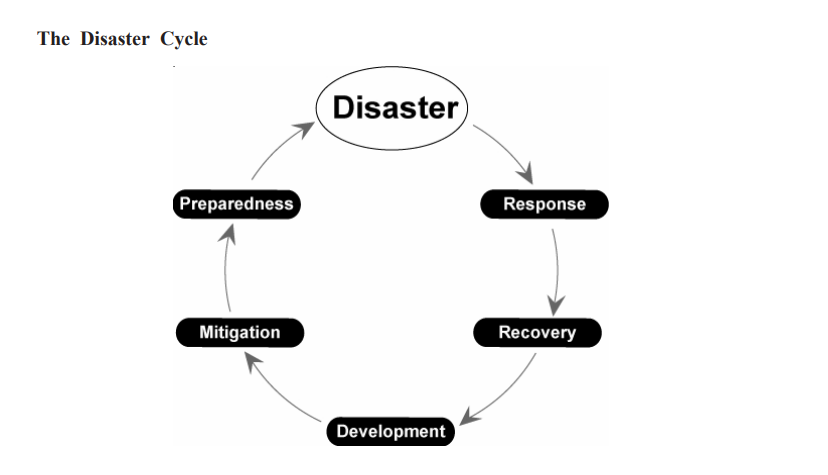 The processes covered by the disaster cycle can be illustrated through the case of the Gujarat Earthquake of 26 January 2001. The devastating earthquake killed thousands of people and destroyed hundreds of thousands of houses and other buildings.

The State Government as well as the National Government immediately mounted a largescale relief operation. The help of the Armed Forces was also taken.

Hundreds of NGOs from within the region and other parts of the country as well as from other countries of the world came to Gujarat with relief materials and personnel to help in the relief operations.

Relief camps were set up, food was distributed, mobile hospitals worked round the clock to help the injured; clothing, beddings, tents, and other commodities were distributed to the affected people over the next few weeks.

By the summer of 2001, work started on long-term recovery. House reconstruction programmes were launched, community buildings were reconstructed, and damaged infrastructure was repaired and reconstructed.

Livelihood programmes were launched for economic rehabilitation of the affected people.

In about two year’s time the state had bounced back and many of the reconstruction projects had taken the form of developmental programmes aiming to deliver even better infrastructure than what existed before the earthquake.

The government as well as the NGOs laid significant emphasis on safe development practices. The buildings being constructed were of earthquake resistant designs.

Older buildings that had survived the earthquake were retrofitted in large numbers to strengthen them and to make them resistant to future earthquakes. Mason and engineer training programmes were carried out at a large scale to ensure that all future construction in the State is disaster resistant.

This case study shows how there was a disaster event during the earthquake, followed by immediate response and relief, then by recovery including rehabilitation and retrofitting, then by developmental processes.

Then disaster struck again, but the impact was less than what it could have been, primarily due to better mitigation and preparedness efforts. 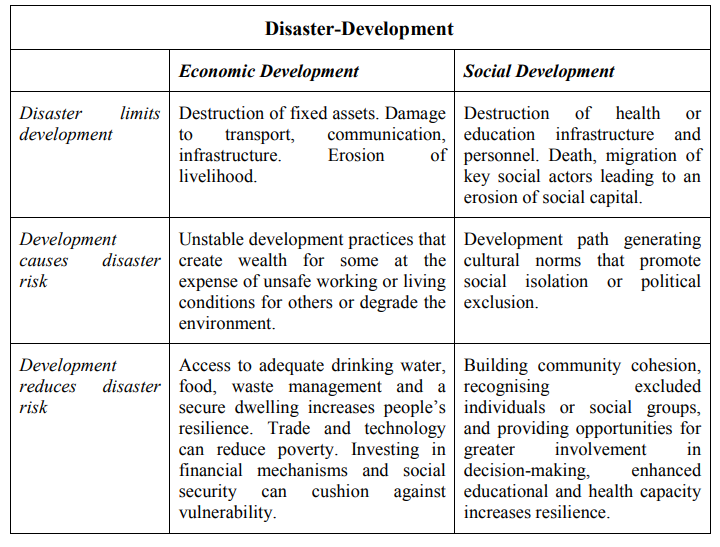 Looking at the relationship between disasters and development one can identify ‘four’ different dimensions to this relation:

1) Disasters can set back development

3) Development can increase vulnerability and

The tendency till now has been mostly to associate disasters with negativities. We need to broaden our vision and work on the positive aspects associated with disasters as reflected below: 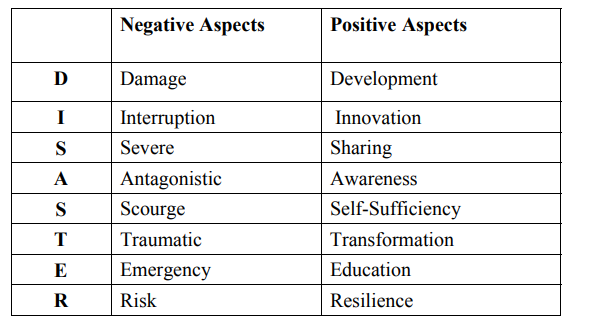 1)Evolution of Disaster Management in India

Disaster management in India has evolved from an activity-based reactive setup to a proactive institutionalized structure; from single faculty domain to a multi-stakeholder setup; and from a relief-based approach to a ‘multi-dimensional pro-active holistic approach for reducing risk’.

Over the past century, the disaster management in India has undergone substantive changes in its composition, nature and policy.

2)Emergence of Institutional Arrangement in India-

A permanent and institutionalised setup began in the decade of 1990s with set up of a disaster management cell under the Ministry of Agriculture, following the declaration of the decade of 1990 as the ‘International Decade for Natural Disaster Reduction’ (IDNDR) by the UN General Assembly.

Consequently, the disaster management division was shifted under the Ministry of Home Affairs in 2002 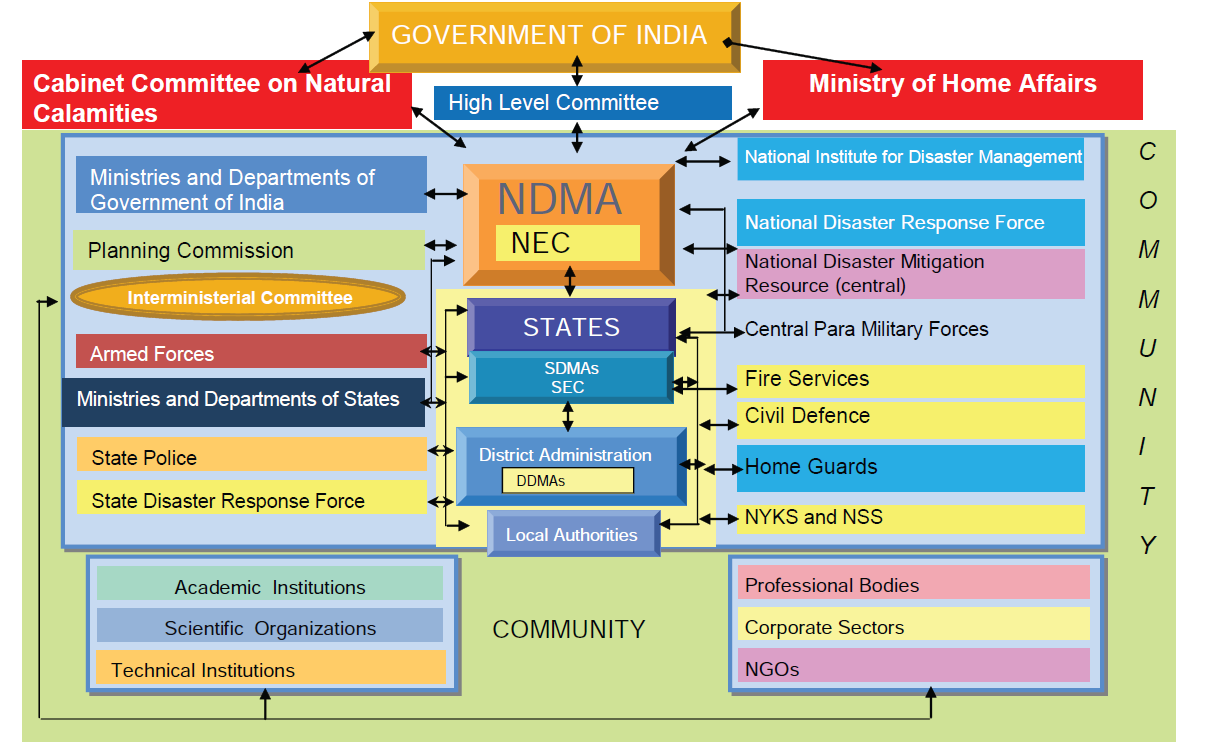 The National Disaster Management Authority (NDMA) was initially constituted on May 30, 2005 under the Chairmanship of Prime Minister vide an executive order. The policy envisages a safe and disaster resilient India by developing a holistic, proactive, multi-disaster oriented and technologydriven strategy through a culture of prevention, mitigation, preparedness and response. The policy covers all aspects of disaster management including institutional and legal arrangements,financial arrangements, disaster prevention, mitigation and preparedness, techno-legal regime, response, relief and rehabilitation, reconstruction and recovery, capacity development, knowledge management, research and development. It focuses on the areas where action is needed and the institutional mechanism through which such action can be channelised.

Post Disaster Management :-Post disaster management responses are created according to the disaster and location. The principles being – Faster Recovery, Resilient Reconstruction and proper Rehabilitation.