President  Outlines Eight Steps for a People Centric Partnership Between India and China:-

Excerpt from the Speech :-

The ship has been named ICGS ‘Arush’, literally meaning ‘first ray of sun’, and will be based at Porbandar under the administrative and operational control of the Commander, Coast Guard Region (North West).

To foster creativity and scientific temper in students, Atal Innovation Mission (AIM) will establish 500 Atal Tinkering Laboratories in schools. It will provide one time establishment grant-in-aid of Rs. 10 lakh for establishing Atal Tinkering Laboratories (ATL) in schools (grade VI – XII) across India. Further, an amount of Rs. 10.0 lakh would also be provided for each ATL over a period of 5 years for operational expenses of ATLs. Thus, an amount of Rs. 20 lakhs per Atal Tinkering Laboratory in each selected school will be spent. Young children will get a chance to work with tools and equipment to understand the concepts of STEM (Science, Technology, Engineering and Math). Competitions at regional and national scale will also be organised to showcase the innovations developed by the children.

In a bid to protect lives of citizens reeling under severe drought in several states, the Supreme Court recently directed the centre to set up a National Disaster Mitigation Fund (NDMF) under a non-operational statutory provision.

According to some experts, the court has committed a mistake by asking the centre to do so. For, Section 47 of the Disaster Management Act, which provides for setting up of NDMF for projects exclusively for the purpose of mitigation- measures aimed at reducing the risk of disaster, has not yet been notified.

As a result of this mistake, the SC ended up directing the Centre to implement a provision of law which for all practical purposes is non-existent.

India and several other nations bordering the Indian Ocean have decided to evolve a regional mechanism for cooperation on Special Economic Zones (SEZ) – or duty-free enclaves with tax holidays — to boost exports.

This was decided at the recently held first-of-its-kind meeting between SEZ authorities from Indian Ocean Rim (IOR) nations at Chabahar, Iran. Notably, Chabahar houses a Free Trade Zone (FTZ) – a synonym for SEZs.

The meeting comes at a time of global economic and trade slowdown and attempts are being made by countries to boost growth through trade.

The IORA is a regional forum, tripartite in nature, bringing together representatives of Government, Business and Academia, for promoting co-operation and closer interaction among them.

It is based on the principles of Open Regionalism for strengthening Economic Cooperation particularly on Trade Facilitation and Investment, Promotion as well as Social Development of the region.

The Coordinating Secretariat of IORA is located at Ebene, Mauritius.

The organisation was first established as Indian Ocean Rim Initiative in Mauritius on March 1995 and formally launched in 1997 by the conclusion of a multilateral treaty known as the Charter of the Indian Ocean Rim Association for Regional Co-operation.

ISRO to test rocket that takes its fuel from air

Indian Space Research Organisation (ISRO) is planning to test an air-breathing propulsion system, which aims to capitalise on the oxygen in the atmosphere instead of liquefied oxygen while in flight. 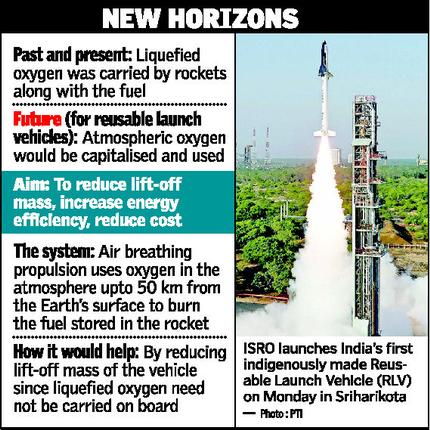 Generally, vehicles used to launch satellites into space use combustion of propellants with oxidiser and fuel. However, the new Air breathing propulsion system aims to use oxygen present in the atmosphere up to 50 km from the earth’s surface to burn the fuel stored in the rocket.

This system would help in reducing the lift-off mass of the vehicle since liquefied oxygen need not be carried on board the vehicle.

This would also help increasing the efficiency of the rocket and also make it cost-effective.

It would also complement ISRO’s aim to develop a reusable launch vehicle, which would have longer flight duration.

According to a report by the Centre for Science and Environment, 84% of 34 bread types sold in India contain potassium bromate, a carcinogen. Potassium bromate is the chemical additive widely prevalent in bread and refined flour.Following this, food regulator FSSAI said it has decided to remove potassium bromate from the list of permitted additives. 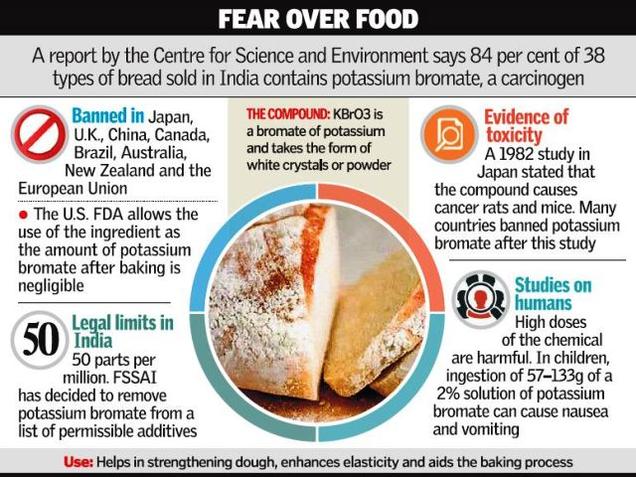 A 1982 study in Japan stated that potassium bromate causes cancer. Following this, many countries including Japan, UK, China and Australian banned this compound.

It is added to wheat flour to strengthen the dough and to allow it to rise higher. It bleaches the dough and increases its elasticity by making tiny bubbles that help the bread rise.

However, the real problem arises when bromate flour isn’t baked for long enough or at a high enough temperature, or if too much potassium bromate is added in the first place.